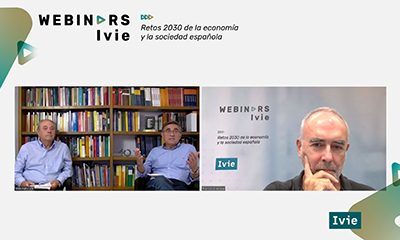 Digitalization is not increasing unemployment, but it may imply other risks such as an increase in inequality

“The fourth industrial revolution, with an increase in the use of digital technologies and robotics, is not the cause of unemployment “, according to Javier Andrés, Professor at the University of Valencia, who participated in the Ivie Webinar on technological change and the future of employment. However, in his opinion, this does not mean that digital transformation does not affect the labor market in terms of employment, wages, inequality, etc., as it does influence the tasks carried out by workers whose routine functions will be replaced with robots and algorithms.

Javier Andrés, who shared the debate with Professor Emeritus of the University of Valencia and Ivie Researcher, José María Peiró, stated that new technologies are replacing more and more workers, but they are also creating new jobs.

Along this line, Professor Peiró focused his presentation on the deep transformation that the tasks performed by workers may experience in the future and how people can adapt to these changes in order to reduce the risk of being excluded from the labor market. Thus, the Ivie Researcher insisted on the importance of life-long learning and the promotion of transversal competencies, such as, critical thinking, problem solving and self-management, which are less likely to be affected by these changes in comparison to tasks that involve physical activity.

In addition, José María Peiró, expert in work psychology, referred to the challenges posed by the need to learn to work with cobots, robots that collaborate with humans in certain tasks. In his opinion, job transformations caused by the digital revolution will affect people of all levels of education and every sector.