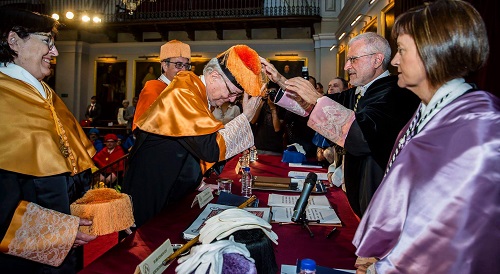 Dale W. Jorgenson (Montana, 1933) passed away on June 12th of 2022, at the age of 89. Prof. Jorgenson is an important point of reference in Ivie’s trajectory, and for most of its members. His work has inspired many of Ivie’s contributions on crucial issues such as the determinants of economic growth, the importance of productivity growth for the progress of nations, the relevance of the sectoral composition of production and, especially, the contribution of new technologies. All of this supported by rigorous databases, based on economic theory, and always linked to key problems for social progress.

The American economist received the honorary award “Doctor Honoris Causa” from the University of Valencia in 2016. His escorts during the ceremony were Ivie’s Research Director, Francisco Pérez, and Ivie’s Director of International Projects, Matilde Mas, who had a very close relationship with him, both professionally and personally.

Ivie’s relationship with Prof. Jorgenson began when he supervised at Harvard University the PhD thesis of José García Montalvo, a Research Professor at the Ivie since it was founded. In the early 90s, the Ivie began to work on the estimation of capital stock in Spain and its impact on productivity growth, receiving invaluable support from Prof. Jorgenson. This marked the beginning of an intense and extensive academic and personal relationship.

In the late 90s, Bart Van Ark, former Professor at the University of Groningen and Prof. Angus Maddison’s right-hand man, who is currently Managing Director of The Productivity Institute (UK), visited Valencia. It was then that the EU KLEMS project -inspired by the theory developed by Prof. Jorgenson on investment and capital- began to take shape. Since the year 2000, the Ivie has taken part in the project, thanks to the funding received from two European Union Framework Programs. The aim of this initiative is to promote and facilitate the analysis of growth and productivity patterns, a line of research the Ivie has always pursued.

The EU KLEMS project, inspired and supervised by Prof. Jorgenson -its Alma Mater- was extended to other countries, creating the World KLEMS initiative. To date, six World KLEMS Conferences have been held. In 2016, the Ivie organized the 4th World KLEMS Conference which took place at the premises of the BBVA Foundation in Madrid. The 7th Conference is scheduled to take place this year on October 12-13 in Manchester, UK. Sadly, Prof. Jorgenson will not be physically present, but his extensive and generous legacy will certainly be felt.

Prof. Jorgenson’s contribution to economic research focuses on the factors that drive progress and, thanks to his works, we can better assess the channels by which knowledge contributes to economic development through the accumulation of different assets, tangible and intangible, and especially, understand the important role of ICTs in recent decades.

His concept of economics as a discipline that assumes the demands of empirically contrasting theories explains his constant concern to improve theoretical, statistical and econometric instruments in order to base analyses and public policies on a more solid foundation. Jorgenson sought to transfer the results of his research to decision making and ultimately help improve society.

His impressive and early academic curriculum reflects the intelligence and effort of an economist, an example for many generations of disciples who remember with deep emotion and gratitude his generous contributions and advice for the advancement of knowledge.

When he was only age 30, he published the paper ‘Capital Theory and Investment Behavior’, with which he completed the definition of the user cost of capital, adding two relevant variables to depreciation and the interest rate: taxes on the return on capital and the effect of variations on the price of investment goods. Jorgenson’s cost of capital formula summarizes all the information needed to make investment decisions.

Prof. Jorgenson has led major international statistical and scientific cooperation projects and his work has provided guidelines for the efficient design and evaluation of important public policies. We have undoubtedly lost one of the world’s greatest economists who has had a profound influence on the advancement of rigorous economic analysis in fundamental matters for the progress of society, both for advanced and developing countries.

The members of Ivie deeply regret his loss, but we are convinced that his work will continue to serve as a benchmark for current and future economic research. The many members of the KLEMS community will pay a well-deserved and touching tribute to their beloved and inspiring mentor and friend at the Manchester Conference in October. The Ivie wishes to pass on to his lifelong companion, Linda, all the affection forged over many years of complicity. Linda was always looking for ways to make Dale’s life more enjoyable, with activities such as travelling, which she also enjoys, and, thanks to Linda, Prof. Jorgenson never said no to the many invitations he received from the Ivie, and was even willing to promote the KLEMS project in Argentina. 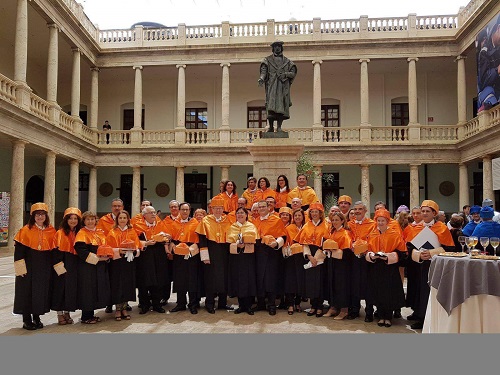 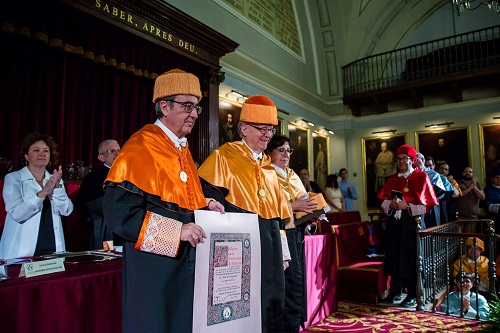 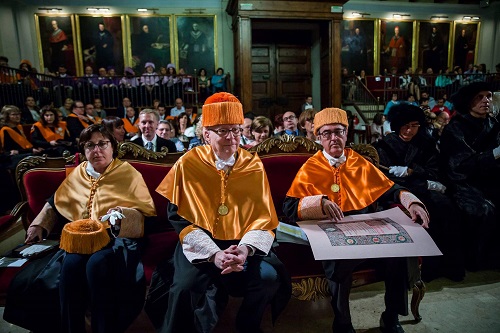